Best Series About Politics That You Should Watch

The greatest thing to do to escape reality totally is to jump in and immerse into another one like series about politics. Over the past few years, it’s become increasingly difficult to pay attention to the news.

Political ads attacking each other, laws restricting access to fundamental human needs, and foreign relations issues combined with the rising domestic issues at home make reality a bit tough to live at times.

Political TV shows have been popular with both viewers and critics, and those who want to learn about the politics of another (fictional) country might find some of the shows on this list interesting.

Veep is the cream of the crop of political satire on television. The sitcom contains some of the most humorous, pungent, and quick-witted writing in television history and is notable for the one-liner insults that are hurled around amongst individuals on Capitol Hill. The Vice President of the United States, Selina Meyer (Julia Louis-Dreyfus), is portrayed in Veep.

Meyer’s team, made up of kooky and sarcastic Washington, D.C. stereotypes, scrambles to make their mark on the country and leave a legacy. However, they tend to get too involved in ordinary political games instead. The show is genuinely the funniest American political show there is out there. Veep is streaming on HBO Max.

The Netflix show The Crown is a dramatized history of Queen Elizabeth II's reign, but it also works as a look back at the modern Prime Ministers of Britain.

The Crown's creator, Peter Morgan, wrote the award-winning stage play The Audience, which is about the Queen's weekly meetings with her different prime ministers. Some of the episodes of the Netflix show are based on The Audience.

From John Lithgow’s Winston Churchill to Gillian Anderson’s Margaret Thatcher via Jason Watkins’ Harold Wilson, some of the show’s most fascinating moments have been the insights it has provided into our political leaders.

Exploring the varying power dynamics between the PMs and the former monarch, the show touches upon some of the biggest political scandals and upheavals in modern British history.

Borgen exposed the workings of Danish politics to a wider audience, demonstrating that Danes were capable of much more than just the Nordic Noir detective series.

In season one, Birgitte Nybody (Sidse Babett Knudsen) becomes Denmark’s first female prime minister, and across four seasons, the show brilliantly molded together political realism and personal dramas and tackled big topics such as feminism and the media at the same time.

The West Wing is a well-known political drama on television that follows the staff of the White House's West Wing. The Presidential Advisers end up getting their personal lives a bit too involved with their jobs, which literally help the United States of America function as a country.

Despite being classified as a "Drama," the show has a very nostalgic and relaxing vibe, maybe since it has been running for more than 20 years. This show has some amazing language and writing examples, and is a great and even exciting watch. Available on HBOMax.

In the Ted Danson movie Mr. Mayor, a retired businessman from Los Angeles wins the job of mayor and is excited to start making the city and neighborhood better.However, once he gets to City Hall, he quickly realizes that the world of local politics is not at all like the business he was used to. and he is a tad bit unprepared.

The intense thriller series Designated Survivor follows Tom Kirkman (Kiefer Sutherland), a lower-level cabinet member who becomes President after an attack on the night of the State of the Union address kills the President and most of the Cabinet. This is probably a reality that most people would not want to escape into.

The Sun King, also known as Louis XIV of France, is the subject of the gorgeously opulent and soap opera Versailles. The show focuses on the courtly drama and scandals of the time, which set it apart from other times.

Blagden is great as a king who believes he was chosen by God, which makes him both brave and confused. Vlahos is just as confident as Louis's brother Philippe, the Duke of Orleans, who often dressed as a woman and had an affair with the Chevalier of Lorraine.

There are mistresses and sexual romps to spare in the series, but also mysteries, double-crossings, and witches. This is not a stuffy historical drama, but a modern-feeling escapade with a minimal glance towards accuracy. We wouldn’t want it any other way.

It’s been called a gamble. It’s been called a revolutionary step in television. However you look at it, House of Cards is certainly something you need to witness. Whether you watch all the episodes in one sitting or spaced out over a few weeks, the show has an undeniable draw that will suck you in.

The political thriller is a remake of the same-named BBC program, starring the now-exonerated Kevin Spacey (also worth checking out on Netflix). It sets out to take on drama juggernauts from HBO, Showtime and AMC; succeeds in part. Spacey's portrayal of Frank Underwood in the show is its most captivating feature.

He can carry scenes, and occasionally even entire episodes. The show centers on Underwood's ruthless ascent to power alongside and, at times, in opposition to his cold-blooded, aspirational wife, Claire (Robin Wright). The show lies somewhere between the exceptionally boundary pushing Homeland and the intelligence of the early West Wing episodes. 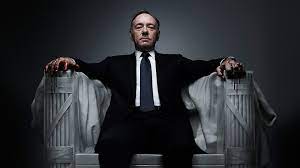 Which TV Show Is A Political Drama?

What Should I Watch After Politician?

Are you looking to escape the crushing 24 hour news cycle but can’t quit politics? Interested in following politics in a world that isn’t a total nightmare?

The latter may not be feasible, but Netflix and other streaming services still have a wide variety of political television shows in their libraries. Watch this top political series and take in the high politics from the comfort of your couch and stay alert to latest news on Bingepost.